Today is the 70th anniversary of something, do you know what it is? I hope so, if not, well whatever.

Today is the 70th anniversary of D-Day. Please tell me you at least know the very basic premise of what happened now that I’ve said that. It was the start of the Allied invasion of France via the beaches of Normandy on June 6, 1944 during World War II. I believe it is still to this day the largest amphibious invasion in history.

You’re probably wondering why I decided to post about this and not something about books today. I’m doing so because there are some events that we need not forget. Who doesn’t know about Lexington and Concord? Or Independence Day. Or Gettysburg. Or President Lincoln’s assassination. Or Pearl Harbor. Or September 11. As far as American history is concerned, the events that took place on the dates I’ve mentioned are as unforgettable as it gets. And there are others, but the point is that no one really considers D-Day to be one of these dates that should never go unknown to any generation.

If you’re one of those people who doesn’t know what happened that day or maybe you’ve never even heard the date, then I ask that you do one thing that will give you just a little perspective. Take a look at this map of Nazi Germany. Just about the whole of Continental Europe is under their control. 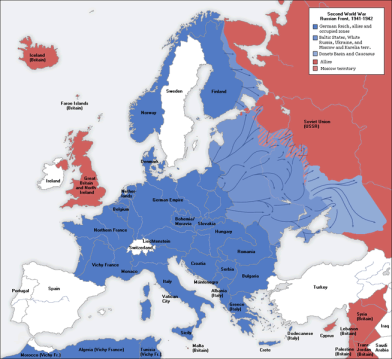 Imagine that. A single foreign power having the ability to take over an entire continent, and Europe at that. The thing that people may not realize is that had just a couple of events gone differently during the course of the war, if Churchill had surrendered rather than watch London destroyed day after day, or Hitler had sent his men into Moscow to take over the capital rather than into Stalingrad in an apparent ego trip, then who knows what might have come next. If you know a little about the war like I do, then you know Churchill never surrendered even with London in ruins and the Red Army was able to stop Germany’s advance once the cold Russian winter hit. Had these two events played out differently and Hitler faced no more resistance in Europe, then an invasion of America would be inevitable. You’re probably thinking Pearl Harbor happened. That wasn’t an invasion. That was an attack with a very specific purpose, destroy the Pacific fleet.

But this post isn’t meant to be a history lesson because I know some of you will already know all of this. The invasion of France on D-day only happened because the Allies decided that Stalin had to become their ally if the war was to be won. According to what I’ve read, he agreed to help the Allies with Japan while the Allies agreed to help him with Germany, thus the invasion of German occupied France. This was the turning point of all turning points in any war. The invasion would not be called off and massive casualties were expected, but it was either this or let Hitler run wild and do whatever he wanted.

Very long story short, the invasion was successful and the Allies made their way across Europe over the course of the next ten months, ultimately ending the war with Germany. And of course the war with Japan a few months later by dropping the first and only nuclear bombs in history.

Now you might be wondering why I believe you all should know about this. Because it’s an historic event in the course of all human history, not just for Germany or France or the UK or the United States, but for everyone. The world would no doubt be a different place had the invasion been unsuccessful. It would have been a debilitating loss for the Allies that may not have allowed for another attempt to enter continental Europe for years into the future.

One last point that I want to make for you guys. Have you ever taken a look at the list of federal holidays? If not, you can do so here. You’ll find that there are only two holidays that are religious, right? Christmas and Thanksgiving. These should not be included on the list and should be on the list of other religious holidays that are recognized by the government, but not necessarily federal holidays. Why? Because what about the whole separation of church and State? But I guess it doesn’t apply to major Christian holidays. Anyway, these should be taken off the list and three should be added. June 6, September 11, and December 7. D-Day, the terrorist attacks on 9/11, and the day a foreign power attacked America. Every one of these dates represents a moment in our nation’s history that should not be forgotten.

I’ve read that the most accurate depiction of what took place on the beaches of Normandy may be the opening sequence from the movie Saving Private Ryan. Skip to the 5:00 mark and it’ll put you at the start of the fighting. I warn you, it’s graphic.

Photo Credits: Do You Know About

47 thoughts on “Something More Important than Books”