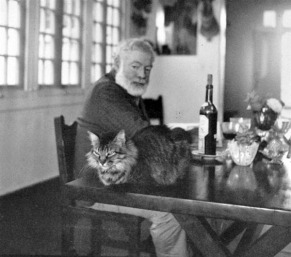 We all know that there are a million things going on in most books that may or may not affect the story. Could one of those things that doesn’t be whether or not your MC has pets? I’m not sure it’s a clear cut answer. Let me think a little about this.

Katniss and her family have a goat. But then she of course hunts, so she’s not exactly a PETA spokesperson. Elvis Cole has a cat that frequents his house, but I don’t think the cat is necessarily his. Or maybe he is, can’t remember exactly. I think the cat was shot at some point too. Let’s see…Harry has Hedwig. Those are just about all the ones I can think of off the top of my head. I’m wondering if any of these say anything about their owners. Maybe that they’re responsible. And affectionate. And maybe lonely at times? I’m not sure. But maybe you know better than I do.

You all should know by now that I’m not currently writing because I’m focused on other things that I feel are more important, BUT in my current WIP Andrew and Sydney have decided to get a dog. An English bulldog that they intend to name Arnold. See, I’m not sure what it says about them that they’re doing this. I mean, they’re making some major changes and the bulldog is one of them. He’s all set to join the family very shorty after Sydney moves in. Maybe they’re paternal. Maybe they’re bored. Maybe…I don’t know why the heck they’re getting a dog? The point is that perhaps there doesn’t always have to be a particular reason for a writer to do something. At least I don’t think so.

Tell me about your characters’ pets. I think cats and dogs should be the most common, but who knows? Birds, snakes, turtles, whatever. I want to hear about them. And tell me why you chose to give your character at all.

26 thoughts on “Characters and Their Pets”