I’ve actually been wanting to write a post about this since seeing the original article written about a month ago. But I told myself that I’d only write it when I had time to sit down and focus rather than just typing something up on my phone. Today is that day.

Before I get into any of the details here I want to state my reservations about the whole thing. Some might say this is scientific. Others might say the original author quantified the question. But I believe both statements to be false. Information was taken from the Social Security Life Expectancy Calculator and combined with reading data from the Pew Research Center.The author essentially took two averages and plugged those numbers into a graph. There’s nothing wrong with that, but let’s be honest about how accurate the numbers really are before even getting into the numbers.

First, you should know who is falling into which group of reader. Average = 12 books a year. Voracious = 50 books a year. Super = 80 books a year. The author used those numbers to “calculate” how many more books we’ll read based on how much we read and our life expectancy. I’m a 25-year-old male who falls somewhere between being an average and voracious reader. According to the data I’ll read between 684 and 2850 more books during the course of my lifetime. That’s quite the range for something that claims to utilize data. But that’s what it says.

How about you? Two questions here. First, how many books does the data say you’ll read before that funny thing called death? And how many do YOU actually think you’ll read? I’ll say I think I’ll be able to read exactly 3429 more books over the rest of my life. The best part is I keep track of all that information. My tally starts today. 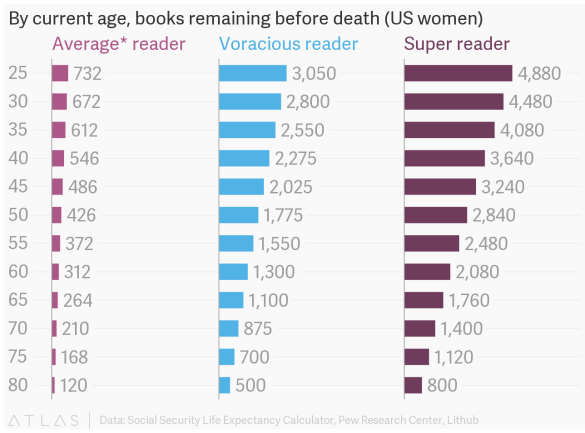 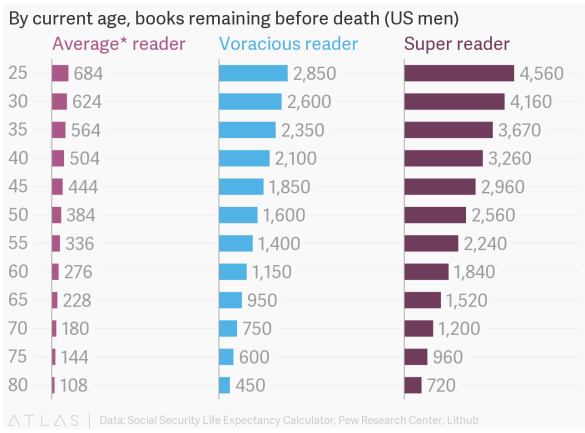 13 thoughts on “How Many More Books Will You Read Before You Die?”